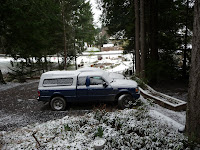 As I sit here on a February morning at my home computer, which is parked in front of an expansive window, I find myself thinking of Betty’s RV Park in Abbeville, La.
It’s high on my list of “Places we’d rather be right now” as I sit mesmerized by the falling snowflakes.
It’s not supposed to be like this, not here, at this time of year. The daffodil crowns are six inches above the ground and finding themselves surrounded by snow, instead of spring sunshine. But we are no exception to what has been happening across North America this winter. Weather has been unusual and now it’s our turn.
And those groundhogs, with their silly shadows, don’t know a thing about weather patterns.
We have been home since Dec. 15, and since that date, I have tried to think of a way to wind up our blog. I thought I’d write more about the trip, filling in some of the details, but as yet, I haven’t found the passion to do that.
Our 18-week journey was the ultimate escape of our life to date. We simply left our lives and hit the road, an appealing thought this morning even though we’d have to haul Harley through some snow to get to the ferry. But even though we dreamed we could leave all responsibilities on our front step and pull out, we knew we’d carry much of it with us — and we did.
We have two daughters and a son-in-law and although they are in their mid-20s, they do need us now and again. Skype helped immensely with that but sometimes the girls were unwilling to discuss some of the bigger things in life in a virtual face-to-face setting. It wasn’t until we were home that one of them broke off her engagement, and came to us for support over the Christmas season.
We knew we would return to our everyday life, and work, as property managers here on Pender Island. The work has been steady for Ian, sometimes a good thing. But on other days, the winter depression he has always fought seems to win the battle. Doctors are again part of his life, hoping to regulate the brain chemicals he lacks.
I — and there is a reason this is the first time I have used the first person on a blog entry — too have been busily seeing doctors. When we were in Quebec in September, my cousin Brian died after a long battle with kidney cancer. A little further down the road, we learned his younger sister had announced she would be having a kidney containing a tumour removed, an operation that took place in January.
When in Quebec, I spoke with Brian’s wife who told me this all started a few years ago with a simple sore back, nothing really at the start, but persistent until it reached the point that it was more than simple.
Part way through our trip, we talked about long days driving in our truck and about the mattress on our bed in the trailer, whether it was the culprit. After a month at home, sleeping in our own bed, we knew any mattress had little to do with this so I went to the doctor.
The surgery to remove my right kidney, which encompasses an almost-certainly cancerous tumour, is scheduled for March 29. The cancer is fully contained in the kidney and rated as stage one, making for a wonderful prognosis. My doctor was surprised that I didn’t think two cousins with kidney cancer qualified as a strong family history, that is until Ian pointed out there were 46 of us in my generation. My doctor was surprised at how many first cousins I have.
And bless the advent of the social media. My eldest brother set up a sub-group on Facebook of the Gauley family (my mother’s maiden name) so I could let other cousins know my diagnosis. Many of them have gone to their doctors, seeking an ultrasound or CT scan of their kidneys.
And they all know I still would say I have a bit of a sore back, not enough to even take a Tylenol.
It wasn’t until we put the word out to our American friends, some made during this journey, that we thought of one of the major differences between our two countries. My surgery is not an insurance matter and not a financial matter in this home. As a Canadian, I need the surgery and will have it, covered by national medicare that is available to all. This is not a political discussion, simply a fact of Canadian life.
The kidney cancer, even cured, will affect my ability to obtain private insurance for coverage in the United States on future trips. I believe I will be able to get it, but it will cost more. And still, we talk of our next trip and are so thankful we set out on our “big” journey when we did — thankful that Manon, my cousin Brian’s wife, told me about his simple sore back; thankful that we had such a healthy, happy trip exploring all kinds of new-to-us places in our own vast country and the United States; thankful that we had reached a point in our lives that we could make this trip; thankful that we said (to a degree) to hell with money, we’re going.
And after this surgery is done and finished, I have no doubt we’ll say to hell with money, again.
So, how are things going at Betty’s? Off to Touchet’s for the music and food on Saturday? Is there still room for us?
Posted by Vicki-Lynn and Ian Dutton at 9:41 AM