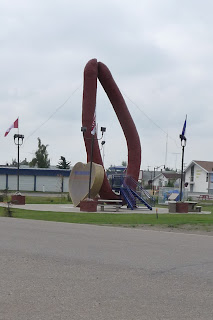 We had just crossed the border into Saskatchewan, naturally, since that’s what the border signage says.
The logjam was a few hundred yards away, at the gas station at the junction of highway 3, 45 and 21, at Alcurve, Alta. Everybody going either way wants to fill up in Alberta, with its cheaper gas (89.9 cents a litre, a dime cheaper than in Saskatchewan.). We joined the lineup, filled up, got coffee and tea inside and came out to the ubiquitous sound of the car alarm.
They truly are everywhere.
We’ve travelled about four hours east of Edmonton, on the blue highways on the map, smaller and slower but interesting. Stopped at Mundare, Alta., a spot we’d never heard of but filled up with gas just across the road from the big sign saying Small Town...Big Heart.
The words were written under a huge kielbasa, or Ukranian sausage for those of you who haven’t spent time in the West. Mundare is the home of Stawnichy’s Meat Processing, makers of sausage among other things.
We don’t intend to travel Canada according to “the big” category: the giant decorated Ukranian egg in Vegreville, Alta., the big moose on the Trans Canada Highway in Moose Jaw, Sask., the giant nickel in Sudbury, Ont., the goose at Wawa, Ont., but the giant kielbasa in Alberta was an unexpected surprise.
We’ve not been this far north travelling across the Prairies before and true to what friends have long said, it’s very different this way. If you’re comparing this to southern Alberta and Saskatchewan, there are many more clusters of trees, rolling hills and roadside lakes. If you’re still dreaming of life at home on the West Coast, it’s quite flat and barren.
Wildlife doesn’t exactly abound but in the space of a few hours we’ve seen a coyote loping across the highway, a badger hunching close to the ground as it scurried for cover, and multiple skunks and porcupines on the losing end of a battle with traffic.
If our campground in Devon and what’s rolling down the road late on a Sunday afternoon are any indication, Albertans like their camping equipment BIG. We were the “poor folk” in Devon if wealth is measured by the foot. With the exception of a couple of tent trailers, we were the smallest among the hundreds there. Our camping neighbour, a visitor from Germany in a small Class C rental unit, commented on our size compared to the behemoths around us. “You’re doing your trip in a small trailer,” he said in his halting, but precise, English. “All the rest of them are very big.”
Having had six people for dinner on a Saturday night in the Devon campground, we’d say that yes, we are small, but very effective. Our guests toted their own lawn chairs, helped with dinner prep and had a good time.
That is, until about 10 p.m., when the rain started to fall. Then all headed for their respective homes, ours being the smallest.
Posted by Vicki-Lynn and Ian Dutton at 12:37 PM