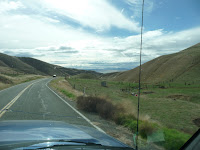 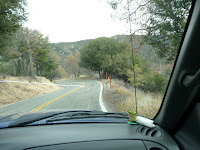 Charles Kuralt of PBS and NPR once famously said that the U.S. interstate highway system makes it possible to travel across America without seeing anything.
That’s a little harsh. The never-ending clusters of McDonalds, Burger Kings and gas stations that crouch at every intersection are not nothing. In fact in many ways, too many perhaps, they are the flavour of America.
Following the lead of our literary and literate hero, William Least Heat-Moon, we prefer smaller roads, the Blue Highways of the Missouri author’s book. But only sometimes.
Our predilection for the road less travelled has sometimes led us into more adventure than we might have wanted. Consider SoCal.
We arrived in Southern California, cruising past Palm Beach and Palm Desert expecting blue skies, bright sun and George Hamilton working on his tan. Instead it was hard to tell the colour of the sky, the sun was orange and fuscia through the sepia haze that passes for air, and as for George, well it’s hard to get a tan through the Haz-Mat uniform residents need to stay here long-term.
So when we had a chance to escape the valley and pass through the San Bernadino forest, that sounded like a good option. Following a small (by California standards) highway, we headed to the trees and — we thought — a breath of fresh air.
What we got instead were a lot of gulps — perhaps gasps is closer — as we inched our way up a mountainside, hauling Harley in ever-narrowing concentric circles as we scaled the San Bernadino MOUNTAINS, not just the forest as it said demurely in our map book.
Bridge after bridge on the way up — did we mention Ian hates bridges — followed by harrowing hairpin turns on the way down, with Harley (our trailer) vying with our truck for the lead in this race to the bottom. After finally escaping our alpine ambuscade we found ourselves in a desert wasteland. In a state with a population equal to that of Canada, who knew there could be so much empty space, this within 60 miles of Los Angeles. Given its inaccessibility and lack of agricultural use, the land seems worthless, which probably means it’s about $1 million an acre. California real estate prices are a little high.
We also had a secondary-highway thrill with our GPS. The loyal Cupcake, back in our lives after a brief banishment in favor of Skippy, her male counterpart, led us down a small road in Nova Scotia toward the desired small highway. Our preference for small roads was tested by Cupcake’s choice, as pavement gradually narrowed, wavered, then disappeared altogether.
The gravel road we were now on also narrowed and petered out, leaving a narrow dirt track that led us to the edge of the desired highway. All that stood between us and continuing our trip was a steel barrier and a four-foot ditch. As we sat on the narrow track and looked at the vehicles whizzing by, we pondered technology — and how we were going to turn around.
As we followed the same road out that we had taken to find the barrier, a fellow who had watched us curiously as we went toward the highway stared in amazement — or perhaps amusement — as we returned.
Cupcake is a valuable asset at times, but also contributes to our adventures. Her cheerful “You have reached your destination,” usually results in a careful, sometimes frantic search, for our true destination, which could be half a block away. Likewise her insistence on taking major highways unless instructed otherwise, and her preference for routes through the heart of cities makes for exciting journeys, particularly with Harley in tow. Changing lanes is an adventure in itself.
And the one area where we stuck to the main roads was in West Texas, New Mexico and Arizona, where even along the interstates civilization is scarce. Take Kent, Texas. Please.
Kent is two gas stations, one on each exit off I-10, with the westbound lane’s version manned by a young woman with a stud in her tongue. It would seem her social prospects might be limited in the community, in redneck rural Texas, flavored with the ever-present west wind, but it’s her call. But the prospect of a life spent in such a venue was a little daunting.
Secondary roads are fine if you have choices, but if that’s your only route out of town, life might be a little lonely.
Posted by Vicki-Lynn and Ian Dutton at 10:21 AM