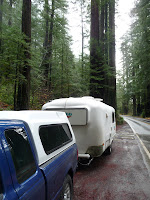 Did Ian mention his fondness for bridges?
The Golden Gate in particular?
After a sunny sojourn in San Francisco it was back on the road north — this time on Highway 101 across the bridge yet again, this time in the rain and hordes of traffic toward California wine country. Our trip took us through the Sonoma Valley, the less famous but equally wine-blessed sister valley to the Napa, then on.
There was little time for wine tasting, as Ian has been the solo driver thus far on the trip and also has been the solo wine drinker for far longer than that. In the interests of sobriety, it was decided we would keep on going even though the vote on the issue was 1-1. Apparently in the democracy of marriage, some votes carry more weight than others.
The state is one of sharp contrasts, with densely populated urban areas interspersed with huge areas that seem almost empty as we speed along the highway that snakes north through the mountains, playing peek-a-boo with the ocean and the flowing mountain streams, then switching to a narrow corridor of towering evergreens altogether too reminiscent of the canyons of concrete that dominate the urban settings now behind us.
It was also along this stretch that we saw one of the eccentrics for which California is so justly famous. As we approached along the rainy road, a figure ahead, clad in a tuque, ski jacket and carrying a backpack burst into a lively jig in the middle of the lane of what we thought was our lane. With canvas sneakers bouncing and hopping, and arms waving, the bearded walker saluted our passing in a pas de deux alone. California indeed.
And so to the mightiest of these corridors, the Avenue of the Redwoods, with their massive branches lacing their fingers together and their enormous trunks emphasizing the insignificance of man. Shrugging off the steady rain from overhead and waltzing in place in an on-and-off courtship with the autumn wind, the mighty trees seem to bless us as we pass, as if wishing us a safe journey home, and to our everyday lives.
But not yet.
The road takes us north to Crescent City, then it’s on to Grant’s Pass, the I-5 and Oregon where our companions will be far less wooden and far more human — friends are why we do this.
Posted by Vicki-Lynn and Ian Dutton at 12:05 PM