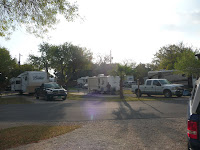 You see all kinds of marriages in an RV park. And you know what kind it is within minutes of the happy or unhappy couple pulling in to stop.
They park their RV, and then you know.
On a recent Friday, the North Dakota truck towing a 20-something foot trailer rolled in. Before it came to its final halt, the surrounding campers thought we knew what was before us.
“Oh honey, a little more ahead.”
“Like this, sweetie?”
“No, a bit more to the left, pumpkin.”
And so on.
It wasn’t until the rig was set up and unhitched that we all saw the light.
He had removed one propane tank, telling “Cupcake” that he was going to have it filled, here in the park, and tied it securely into the back of his truck.
A discussion ensued, with his wife saying there wasn’t much in the other tank so why not fill them both?
“Oh, good idea, sweetie.”
So he disconnected the other tank, untied the secured tank already in the back of the truck, lynched them both together and went back to report in through the screen door, “They’re all ready. You should have as much hot water as you need now.”
“Oh thank you sweetums,” floated out through the screen.
But then he leaned closer in, and said, “That light is on. It means the pilot didn’t light. You won’t have any hot water now. But just push that button and it should light.”
The whole park knew it wouldn’t light without a propane supply but it was few minutes before he said, “It’s not lighting.”
There was silence.
Then, “Well how stupid am I?” she said. “The tanks aren’t connected,” followed by a high-pitch almost teenage giggle coming from the senior citizen wife.
He, presumably married for some time, took the question to be rhetorical and joined in.
“Well,” he said, “how stupid am I!?!?!?!?
“You’re really stupid,” she said, no giggle evident.
And that sums up that marriage.
Posted by Vicki-Lynn and Ian Dutton at 10:14 AM