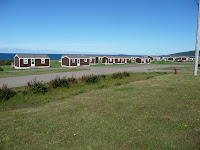 She’s been coming to the same beach cabin for 20 years, all the way from New York City, and plans to keep on doing it.
Others come from New Hampshire, and there are those, home grown, who come from Nova Scotia.
What they have in common is Inverness Beach Campground.
The 41 campsites and 41 cabins may not look like much but their view of open ocean plus three miles of Cape Breton beach at Inverness are plenty to get your attention.
Anything else, the MacLeod owners will do for you. The campsites are kept simple, deliberately, but offer water and electricity, plus WiFi. The cabins, while extremely well maintained, on the outside appear pretty basic, all cut from the same mould.
But a trip inside reveals utilitarian space, maximized by a decorator’s touch.
Anita MacLeod, one of 12 children, was raised on this place after her parents bought it in 1969.. Four of the siblings now operate this campground plus MacLeod Beach, with its 170 campsites, which was added to the roster in 1980, not to mention the MacLeod Inn for the non-campers. They’re a hospitable family and it shows.
Anita, a seamstress, makes all the draperies for the cottages, each of them different. She prides herself on natural fabrics, which she says clean much better. The cottages gleam, even toward the end of season as the MacLeods prepare to close in November.
Her brother, Ivan, points out that all it takes for their clean cottages to smell wonderful is to open a window on the ocean side and another on the back. The breeze blows through a scent like no other. And Anita points out they use natural cleaners.
The unassuming campground offers everything you might want: WiFi, laundry, tennis and basketball courts, a playground plus all that nature has to offer. Its clientele boasts returnees of many years, some of them with recognizable names, CBC radio host Shelagh Rogers among them. She once thought she might have to wear a floppy hat and sunglasses as a disguise until Anita pointed out all she need do is keep her mouth shut. It’s that voice and laugh that are recognizable.
Rogers also knows the place through author Alistair MacLeod, Anita’s cousin. Anita proudly points to a new book in the house, Light Lifting by Alexander MacLeod, Alistair’s son.
“I think I have the best job in the world,” Anita says with a smile, although she admits all who work at this place, up to 20 in the summer months, are now looking forward to November. “My mother always got depressed at this time of year because she wouldn’t get to meet people for a while.”
People flock to the area because it is near the start of the Cabot Trail, world famous for its majestic scenery. Inverness Beach is a great place to park the trailer before making the Cabot Trail loop as a day trip.
But the second trail on which Inverness sits, the Ceilidh Trail, brings them back again and again for the music. The Rankin family calls Mabou, just down the road, home and two of the sisters operate the Red Shoe Pub, featuring of course Celtic music The tourist season winds up here with the Celtic Colours International Festival, Oct 8-16, as the leaves turn their brilliance on.
Anita points out there’s much more work to be done, even after the gates close. That’s when all the bookkeeping is sorted out, then it’s Christmas and before you know it, it”s February.
“We start taking reservations on the first of February,” she says with a smile. “Then it’s crazy. We’ll get hundreds of calls.”
They keep coming back.
Posted by Vicki-Lynn and Ian Dutton at 5:02 PM