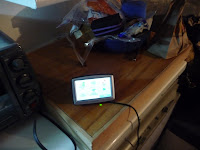 
“Who is she?!?!?!?” Vicki yelped as we made that first left turn to leave her brother Warren’s subdivision.in Dexter, Mich.
It was her first words in the truck, as she purred “Turn left” that set Vicki off. Ian, sometime in their four days in Dexter for their nephew Ryan’s wedding, had changed the voice function on the Tom-Tom GPS system they borrowed for this trip. For some reason, after 13,000 kilometres, Ian had grown tired of the Miss Efficiency voice that had been cooing form the Tom-Tom.
Suddenly it was Tom-Tom as one of the Bond girls giving James instructions on how to please her.
Vicki just stared at the dashboard device. This hussy wasn’t going to be the third person on this trip.
Ian changed the voice function at the next gas stop. We call this guy Skippy, Vicki’s brother’s favourite salutation to all and sundry.
As we roll through the Irish Hills of Michigan, with autumn leaves everywhere and the abandoned resorts of summer lining the road, we contemplate the technology of this trip.
For one thing, there’s a laptop in the lap of the only passenger as the blog is written. It’s plugged into a inverter to use the DC power supplied by the running vehicle. The Tom-Tom sits on the console between the seats, next to the iPod Touch to provide our home CD roster when we tire of the available radio. (Country at the moment, we’ll tire soon.) The iPod plugs into the truck’s stereo system to provide good sound.
The laptop is the news source, a communication device for family and friends and sometimes a family reunion. Last night, in Vicki’s brother’s kitchen, their daughter Robyn, in Winnipeg, had a face-to-face Skype chat with her cousin, Keenan, seated at the island in the kitchen of his Michigan home.
In the trailer there’s more. The Bose docking station for the iPod Touch means wonderful music, something Vicki and Ian couldn’t travel without. Harley, the trailer, was originally equipped with mountings for a television. That’s gone, since Ian and Vicki don’t watch TV at home let alone on the road, leaving only an alien-looking antenna on Harley’s roof.
The convection/toaster oven means there might be a pork tenderloin roasted tomorrow night, or maybe we’ll cook up those Pop N Fresh biscuits for breakfast.
The cell phone parked in Vicki’s purse rarely rings and is put to use even less often. It really is only for emergencies and thankfully, there have been few as we hit the halfway point of this trip.
We wonder how we would have managed without all this nifty technology. We might not have been quite as comfortable and not in touch with friends and family, but we would have been rolling down another small highway between cornfields in Ohio, done with their work for this season.
Posted by Vicki-Lynn and Ian Dutton at 10:37 AM