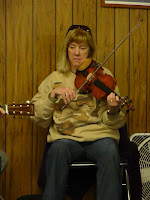 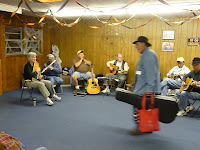 Sheryl plays like a dream; Nelson hurries to join the show


“It’s AH—HUGE. AH—HUGE!!!”
That was our introduction to Steve. He’d come over at Happy Holiday RV Village to introduce himself, pointing to a Casita, another of the fibreglass trailers at this Tennessee, Alabama and Georgia gathering in Cherokee, N.C.
Then he asked if he could see inside our 17-foot, wide-body Burro, otherwise known as Harley, since he’d never seen one.
He was the first of many wandering by, wanting to see our little home of nine weeks. It was a very welcoming crowd. We think they also wanted to see just what British Columbians were like. In both cases, we think they liked what they saw.
Steve, the class clown, quickly saw us as the butt of the jokes, not that we minded but somehow the weekend ended with Ian calling Vicki the Possum Queen. There were a lot of possum/roadkill jokes and since neither of us had even seen a possum until they started appearing, lying dead along the roadside a few days ago, some of the jokes were actually educational.
Both the trailer, a foot longer and a foot wider than his Casita, and Harley’s bathroom were the subjects of Steve’s “huge” comment. Those extra feet make a big difference in the feel of the space.
All we could think of was our family the week before, looking at Harley as a tiny little thing.
Everything’s relative.
Our neighbours for the weekend were in Casitas and Scamps, plus one 13-foot Burro, happy to see Harley roll in on Friday, the second day of the weekend gathering. By then, most campers had met each other, were wearing their name tags and knew this was a musical event.
Once Steve got over “huge” Harley, he wanted to know if we had any musical instruments aboard. Vicki’s flute came out, with her insisting that playing by ear was not something she does. She’s willing to try, but not any good at it.
By the time the group had gathered in a common room Friday evening, Steve was determined she would play with others. After one number, she knew she was way, way over her head.
So did Steve.
So did the others.
But all were very helpful, letting Vicki know keys and chords. And when all else failed, she sang if she knew the words.
It was great fun, and that’s what this group does. Many of the musicians use their fibreglass trailers to go from one music festival to another, weekend after weekend. This gathering had the extra bonus of almost all having the same type of trailer.
That’s almost all because some of the musicians kind of stumbled on the group. Jeff, strumming guitar and mandolin at various points, happened to be in the same park, in his stickey (a somewhat derogatory term used by the fibreglass crowd to describe conventionally built trailers). Suzette, on auto harp and vocals, came with her husband Chance, on guitar, to meet his long-lost cousin Nelson, on guitar, for the first time. She and Chance made reference each night to going home to the big house (a hotel) for the night. Nelson went back to his Scamp fifth wheel.
Sheryl, a master of the fiddle when she isn’t playing violin in a symphony, came along with husband Chris in their Scamp. John, on Banjo, calls a Casita his temporary home.
And then there’s Steve, who uses his Casita for his work as a musician and storyteller as he designs programs for schools, all skills he brought to this event as well, not to mention his play of multiple instruments. His case of harmonicas was put to good use but only after he’d dealt with the cookie crumbs left behind by his tribe of grandchildren. His jokes, many focusing on the possum or the Canadians, kept smiles on faces between bluegrass songs and tunes reflecting the roots of country music.
We have been to many gatherings in B.C., Washington and Oregon. All have focused on the trailers and what people have done to customize their rigs to make them work better for their needs. This was our first gathering where music took centre stage. And it was the first time these three states had gathered together.
It was also a really good time. Ray and Cindy did the work of organizing, while Steve took over class clown leadership. It was a successful combination.
Steve, a large, boisterous man, has eight children, some of whom think he was the model for the current entertainment of Larry the Cable Guy.
He told us of the wedding of one of his daughters, a woman who spent seven years as a nun and who Steve says is drill-sergeant material. When he found himself overcome by emotion as the moment neared to walk his petite daughter down the aisle, she looked up at her father and told him to suck it up, stop bawling and walk.
“Man up,” she said sternly. “Man up.”
Laughing, he says he did what he was told.
But after Steve made the Canadians the butt of many jokes, we kept telling him we could get him back. He didn’t know about the blog, but he did by the time he left Cherokee.
We promised him he’d be on it.
Posted by Vicki-Lynn and Ian Dutton at 3:05 PM