Weeping at the wedding 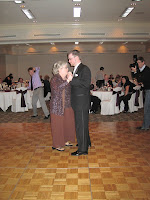 
The groom knew his mother had chosen The Man You’ve Become as the song.
He’d heard it before, knew the lyrics (see below). He thought he was prepared for the sentimental moment, after dancing with his bride of a couple of hours, when he would take to the dance floor with his mother. He knew it would be a moment when he would feel for what he was leaving behind, when he would remember the hugs and kisses of a childhood when this woman put him before everything else.
He knew it would be emotional.
He didn’t know he would cry like an infant.
Nor did he realize half the people in the crowd would cry with him.
At an event that was planned down to the minute, it was completely spontaneous and unexpected.
Yes, the lyrics are tender and heart-wrenching but that wasn’t what prompted the flood of tears.
It was the moment each of those soon-to-be crying people realized his mother was singing as she swayed to the music in his awkward arms.
It was the moment when he looked down at this woman he towers above, hardly able to see more than the top of her head, and realized she was singing the words of this song to him.
She hadn’t planned it that way. The words just seemed to come naturally.
The father of the groom, seated at a table nearby, thought it was a touching moment until he swung around to point out to his sister that his wife was singing the words to their son.
The tears streaming down his sister’s cheeks put the father over the edge. He had maintained control until he realized his sister was crying. Looking around, desperately, he saw another sister-in-law weeping, and she was not alone.
That’s when he joined the rest.
It was an unexpected emotional moment in what had already been an emotional day. The bride wept tears of joy as she recited her vows and listened as the groom spoke his.
The parents of the bride were seen to wipe their eyes, a moment expected by all the guests.
But that mental image of mother singing one more tribute to her son as they danced will linger in guests’ minds for years to come.
Congratulations to our nephew, Ryan, and his bride, Erin, on the occasion of their wedding.
To Christine Martin, mother of the groom, thank you.

Lyrics: The Man You've Become - Molly Pasutti
Big wheels, hot wheels
Little trucks and cars
Skinned knees, climbing trees
Wishing on the stars
Moments may be lost somewhere in time
But the sweetest memories are never left behind
Now you’ve grown so fine
And come so far…
CHORUS
I’m so proud of who you are
The man you’ve become
Thrilled to share your deepest joy
To know you’ve found the one
For the great things you will do
I’ll be blessed ‘cause you’re my son
But I’ll always see the boy
In the man you’ve become

School days, sleep-aways
Driving all alone
Phone calls, shopping malls
Late coming home
It was hard to know when to let you spread your wings
When to let you go to face the challenges life brings
But you’ve grown so fine
And come so far…
CHORUS
Posted by Vicki-Lynn and Ian Dutton at 6:34 PM