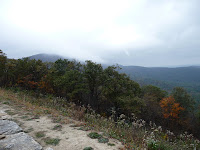 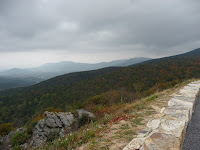 The Great Depression, and this last recession, both generated some good things.
Skyline Drive, a national historic landmark leaving Front Royal, Va., and heading into Shenandoah National Park, is a prime example. The park exists because of the Great Depression. Since 1933, as a make-work project, through 1942, thousands of young men in the Civilian Conservation Corps worked to ready the parkland, developing its extensive trail system and overlooks at the magnificent viewpoints.
These days, there is much ongoing work, rebuilding the miles and miles of low stone walls that line the roadway, serving as barriers to ensure a wayward vehicle doesn’t make the long, long drop to wedge against a tree somewhere below. All are marked with signage saying Your Recovery Dollars at Work, in reference to government funds pumped into the faltering U.S. economy. Nearly $30 million of the dollars designed to jumpstart the U.S. economy have been earmarked for Shenandoah.
Leaving Front Royal, Va., drivers climb and climb some more to hit the Skyline Drive, eagerly paying the $15 toll to enter the national park. For the next 100 miles, drivers will stop again and again at the roadside pullouts, set up to maximize the views of far-off hillsides, multi-coloured in autumn, interspersed with valleys filled with farms and small communities.
Again and again, we comment on the roadway linking these viewpoints, saying the tree canopy is particularly beautiful as the sunlight sparkles its way through the leaves. Gusts of wind bring a shower of foliage down to the road. A glimpse off to the side reveals a forest with a canopy so thick there is little in the way of undergrowth below, just a carpet of brightly-coloured, newly-fallen leaves.
The national park comes to an end and the Blue Ridge Parkway, running along the ridge of the mountains, begins. Elevations of up to 3,600 feet bring cooler temperatures. The stonework of the Skyline Drive is gone, leaving one feeling abandoned to fate if making a wrong turn.
After hours of peering over the sides to the valleys below, we come down from the mountains at Roanoke, Va., as much because we like the sound of the city’s name as because of rave reviews from others who have made this trip.
The valleys, after driving the unpopulated areas above, offer a glimpse at everyday life.
It’s not much of a house in Virginia if it doesn’t boast white columns on the front facade.
And it probably is either white clapboard or red brick. There are lovely, manicured green lawns all around it. At this time of year, there will be an orange flame of a tree in the yard and a sweeping driveway leading up to the door.
On the same property, connected by similar colour scheme or additional driveway, there are other less-imposing abodes, smaller structures or mobile homes, likely housing family or farm workers.
Any town boasts many of these homes, possibly outnumbered by churches. Vicki’s Quebec upbringing says the largest, tallest church in town must be Catholic. Ian’s time in Victoria says it has to be Anglican.
Heaven forbid in Virginia.
Churches carry names but not denominations, although all are solidly Christian. Pastors are advertised on signage, as are upcoming events ranging from revival meetings to group breakfasts.
Every time a large building appears on another of the rolling green hillsides, it is indeed a place of worship.
Towns boast home cooking, from bakeries to BBQs. The area’s other religion, football, waits for it’s worshippers; Thursday night service is for the junior varsity, Friday it’s the varsity boys at high schools throughout the South, all surrounded by stands ready to seat half the town, cheering the kids on. Saturday the shrines shift to the college towns and Sunday, after church, it’s praise the Lord and pass the remote for NFL Sunday.
Posted by Vicki-Lynn and Ian Dutton at 2:28 PM