All creatures great and small 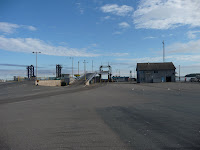 Our guys are indeed still with us

Meet Bain the seagull, the one in the centre


We left the cats behind in Mississippi.
They’re in Natchez State Park, hanging around campsite 45, not too far from the washroom.
Okay, they’re feral, as were our guys at one point, but when Vicki, sitting by a not-yet roaring campfire, heard a noise by the step into the trailer, her first thought was of the bag of cat food sitting on that step. She stomped on over, making noise, to scare whatever creature was at the food until the moment Ian said, “They have skunks here y’know.”
The stomping stopped.
But that’s when she noticed the little black furry guy heading under the trailer.
“You’re sure our guys are inside, right Ian?” she queried.
Yep, they were, and excited about it, too. They were bouncing off the windows trying to see the new guy in town, particularly when they heard Ian using that tone of voice, usually reserved for them, on another beast.
After some coaxing, we met the little black fellow and his companion, a lovely grey and white beauty. We met, but only at a distance. The next morning, the park ranger informed us they’ve been hanging around that area of the park for two or three years. Ian reluctantly left them behind but still holds a mental image of us, walking back into our Pender life and saying, “Look at the Mississippi souvenirs we brought home!”
Natchez State Park, at the south end of the Natchez Trace route, also was full of deer, right next to the signs warning campers to keep out of the bush since it is indeed hunting season. And those signs were next to the big trailer with three pickups parked out front, next to a smaller trailer holding the all-terrain vehicle. What did Bambi, shooed away by Vicki, think those guys were doing there? Having a poker tournament?
Animals, besides the ones inside our trailer, have been part of this trip all along. From the bears in Marathon, Ont., to the armadillos wandering through our campsite near Lake Charles, La., they are a consideration. Cooking dinner meant never leaving the camp stove until we were carrying the completed meal inside to eat. A few minutes later, we heard the raccoon, which had been hovering on the fringes of our light while we were cooking, clatter onto the stove just in case we’d left anything behind.
But one of our most distinctive creatures has to be Bain.
There we were, about to cross from Nova Scotia over to Prince Edward Island at the ferry terminal in Pictou. We were feeling right at home, sitting in a ferry lineup waiting for the NFL (Northumberland Ferry Lines) to let us board.
Partway through the boarding process, they had stopped loading vehicles - we’re at home with that, too - so Ian rolled down the window and asked if there was a problem.
“Nope,” they said. “We’re just ahead of schedule.”
As frequent users of BC Ferries, that we weren’t used to.
Then one ferry worker pointed to a couple of seagulls standing on the pavement a few feet ahead of our truck and said, “Have you met Bain?”
Uh. No.
Who’s Bain, we asked.
“Hey Bain, cm’ere,” the ferry worker said.
And the seagull came walking over. He comes when called.
He’s been hanging around for a few years, said our ferry guy. Now all the workers expect to see him and save tasty tidbits from last night’s dinner or a fishing trip to treat Bain.
And Bain expects this kind of treatment, quickly banishing any other gull brazen enough to think he’s getting some of the attention too.
Not bad for the smallest gull on the tarmac, eh?
The ferry worker confesses Bain is named after one of the guys on a local hockey team, “you know, the small guy who really isn’t big enough but just keeps getting in there, digging away, until he gets the puck.”
That’s Bain.
These guys make Bain their pet at work and although we carry our pets with us, Ian keeps trying to make more friends. With our enforced stay In Marathon, Ont., waiting for truck parts, Ian befriended a chipmunk. Not that he was difficult to befriend. He knew his way around a campsite and he wasn’t short on pulling out the cute moves when he needed them.
It wasn’t long before he had Ian eating out of his hand, and he was eating out of Ian’s hand. We’re brought along the Costco-sized bag of roasted almonds, good for our health and all, but with the haul Buckley scored (yep, Ian named him), we’re sure he’ll be in good health all winter.
His record, Ian proudly points out, is 11 almonds. That’s 11 of those nuts stuffed into his little cheeks as he waddled, face literally dragging on the ground, off to stash them in the bushes somewhere.
Isn’t that gluttony?
It’s a good thing the cats were on their leashes or they’d have taken care of Buckley getting any more attention.
Sidney tried to take care of a flock of ducks lining the pond behind our trailer in Cherokee, N.C. Off he charged, thinking a bird is a bird is a bird. Up until then, he’d only seen them out the back window as he was safely tucked into our bed. But when he decided they were just birds, in mid-charge he realized just how big they are.
He was back in the trailer in no time flat.
In this campground, they warn about the alligators in the pond 20-feet out back.
Our cats are inside.
Posted by Vicki-Lynn and Ian Dutton at 9:09 AM