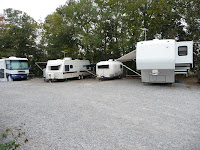 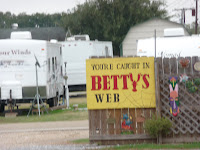 For a good time, call Betty at (337) 893-7057.
Really.
That’s Betty Bernard at Betty’s RV in Abbeville, La., and when our new friend, Jerry Avis at Rainbow Plantation, impressed upon us that calling Betty was one thing we had to do before we finished our trip, well, we e-mailed her (bettybernard@cox.net). It’s the modern way.
And that set us up for four days of non-stop fun in Abbeville, La., at Betty’s RV Park.
Now, truth be told, if we’d driven with no recommendation into Betty’s park, formerly her back yard until she took early retirement 11 years ago, we probably would have circled around and pulled out of there.
She’d tried a few other things to fill some retirement time, but nothing was feeding the need for people. She made a pad for a mobile home, but that wasn’t enough. Then she hit on the RV park idea, got a few customers and they just keep coming back, along with the people they’ve told all about it.
There’s a sign at the exit that says, “You’re caught in Betty’s web,” which describes the experience to a T. That’s why you can even get a T-shirt to that effect in Betty’s office. And it’s true. After four days, we’re singing Betty’s praises far and wide.
In all honesty, it’s not the place that’s the big attraction, as in so many scenic RV parks. It’s the people — first and foremost, Betty, plus the others she has attracted to her place.
The park has everything, as long as you’re driving or pulling a fully-equipped unit. Betty does not offer a public washroom (“I have no bathroom and showers, and I never will. There’s only me here so you know who’d be cleaning it. And I’m not going to clean toilets for people!”) so that rules out any form of a tent or very small trailer.
We, in our 17-feet of luxury, have a small washroom. Thanks be for that or we couldn’t have stayed at Betty’s. Granted, you could easily overlook our Harley in the tightly-parked row of trailers there, most of them 40-or-so feet long and looking like a bus with a few slides out here and there. The smaller of her guests’ units were only two or three times Harley’s size.
There’s a small separate parking lot where you can put the vehicle you tow, or in our case, the vehicle that tows us.
We were hugely outsized, but Ian has come to take these things well.
Betty, from the moment we were signing in, was planning our weekend. She started with the news that daily happy hour begins at 4:30 p.m. in the covered area that runs alongside her house. It’s said as though it’s a command performance but she’s quick to add, “if y’all want to” to all the things she has planned. Of course we wanted to check it out. Consequently, that’s how we got to Touchet’s Bar, listening to great Cajun music before they laid out a gumbo dinner at no cost to us. And Ian wasn’t whining about paying $2.50 for a beer.
What Betty does is draw you out of your rig. When you’re hauling a small house with you, you often don’t come outside to meet your campground neighbours. So Betty sets up happy hour and runs a park where you haven’t got any more room outside than the width of your awning. When she’s full, which she will be at Thanksgiving and Mardi Gras for sure, she can cram 17 rigs onto her fully graveled property. Everyone will have their own electrical and sewer connection, plus good water, but you can also reach out and touch your neighbours.
Might as well go to happy hour. By the time the first one is over, you know these people and know they’re ready to have fun. When it’s time to move on, we know we’ll be back sometime, as we welcome a goodbye hug from everyone we met.
Betty gets you into places you never would find on your own, where you meet her friends. Touchet’s is what Ian and Vicki think of as a very American bar. On the outside, it’s one of those buildings where the windows are covered over and decorating might have been a coat of paint.
But when you walk in, there’s only a fraction of a second where the look says, “Who are you?!?” before it’s, “Did Betty send you?” It’s the same reaction all over town. “Oh, you’re at Betty’s” is said in the same tone as, “Oh, you’re alright. C’mon in.”
Any thought of a full retirement isn’t on Betty’s agenda, as she runs an RV park by herself. She looks around the table at happy hour and says, “My family wouldn’t be able to come back (if I shut down.)”
And come back they do, year after year, and not for a measly week. Some are here for months at a time. It’s their winter home.
Jerry has us carrying the message that he’ll be along soon, for his annual visit.
It’s time to fall back into Betty’s web.
Posted by Vicki-Lynn and Ian Dutton at 9:02 AM