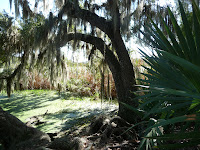 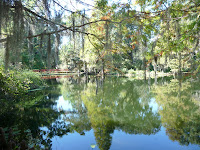 Black and white.
Colour of every kind dominates the gardens, whether they’re a front yard in Savannah, Ga., one of those side yards in old Charleston, S.C. or on the Magnolia Plantation outside Charleston, with its 500 acres of gardens.
But it’s all black and white, all about black and white. There are so few black people taking the tourist trolley tours of old Savannah or a lazy carriage ride around the Battery in Charleston that they stand out in a crowd.
Campgrounds might as well post white-only signs. The blacks you see on the grounds are working.
The introductory video at Magnolia Plantation points out that slaves were happy to work the 500 acres of gardens rather than plant rice, the gold of this low-country part of the south. It isn’t until a much later tour of the five remaining slave cabins that visitors realize selected slaves worked the gardens while others planted miles and miles of rice on the remaining 1,500 acres.
It wasn’t until after the Civil War that the plantation reduced to 500 acres, with free blacks staying to work in the gardens. The plantation house was moved in from the city since blacks had burned the original home to the ground.
As tourists walk through those five cabins, they come to a larger one, actually two cabins pushed together, that was the family home of Johnny Leach, the former head gardener, and Isaac Leach, the current head gardener. Isaac’s son, Jackson, also works in the gardens.
The family lived there, without indoor plumbing, until 1969. Four of the 13 Leach children left to go to college.
In Charleston, our carriage driver, with his degree in history, points out one street, paved in stones that came from England as ballast in the sailing ships that docked at the end of the road. This rough cobbled lane holds the first steps of the Africans brought to the south. Almost all of the millions were unloaded here, stumbling up to the market to be sold.
It is humbling.
Our guide on the slave cabin tour points out that all the southern cooking we have been enjoying, to excess, came from the Africans brought to this land. Rice, barbecue, collard greens, grits, pecan pie, and on and on. A lunch at Jestine’s Kitchen in Charleston dates back to the recipes of Jestine Matthews, a black woman who lived for 112 years, many of them cooking for Dana Berlin, the restaurant’s owner, and her family. Berlin, raised by Matthews, who passed away in 1997, opened the restaurant two years later.
It’s long-established recipes set the restaurant’s reputation. The pumpkin tart will linger in Ian’s memory while Vicki gives this restaurant the honour of serving the best pecan pie she has ever tasted.
The lineup for lunch is well along the block and so routine that the establishment has installed a large outdoor fans to keep waiting patrons more comfortable. We appreciate it on a 75-degree day and shudder to think of a few days before when we sweated through 90 degrees, with 98 per cent humidity, in Savannah. Locals tell us we should imagine 20 degrees hotter for a summer temperature.
We point out that our trailer doesn’t have air conditioning. They shudder.
And we think of the history of people working outdoors in that heat, and of those who work outdoors today.
It’s black and white.
Posted by Vicki-Lynn and Ian Dutton at 7:11 AM