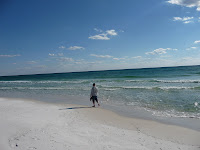 Having spent day after summer day on the beach at Aylard Farm in East Sooke Park with little girls 20-some years ago, Vicki thought she knew a gorgeous beach when she saw one.
Having been to Long Beach in Tofino, whose name tells its story, or the vast expanse of Rathtrevor Beach in Parksville, she thought she knew her stuff.
Having left B.C. to sink her toes in the fine, golden sand of Hubbard’s Beach in Nova Scotia, she knew she still had the touch for lovely beaches on this trip.
But none of that prepared her for Florida.
For one thing, from a distance it looks like snow. The incredibly fine sand is that white.
And it doesn’t help that Highway 98 out of Pensacola is lined with snow fencing, reminiscent of that stretch of highway at Portage La Prairie, Man., except in this case the fencing is to keep the SAND drifts from overpowering the highway.
We stayed first at St. Joseph Peninsula State Park, and frolicked like a couple of kids in the sand before leaping into the breakers, letting them push us where they would. Never had Vicki heard Ian say, “Let’s go swimming.” The man who hates to swim, while sinking into that powdery white sand, couldn’t resist the pull of the breakers.
And that sand makes lovely footing as you head through the surf, trying to swim a few strokes before the next wave tosses you about.
At St. Joseph, the sand, while very fine, fit what we think of as the usual beach colour scheme.
It wasn’t until we hit the shores of Grayton Beach State Park that we were almost fooled into entertaining the thought of snow.
But only almost.
Our disappointment to see the purple warning flag, indicating hazardous marine life, was huge. Our minds immediately leapt to sharks lurking in the frothy waves but the ranger quickly squelched that notion when he said, “Jelly fish.”
But don’t sell the small, transparent creatures short. Apparently they can deliver a sting that makes a towel flicked in a vicious rat’s tail seem preferable.
We stayed out of the water, but satisfied ourselves with hours sitting on the beach, watching the tide roll in with each breaker to tickle our toes.
If felt like a real vacation.
Posted by Vicki-Lynn and Ian Dutton at 12:19 PM