The grenouille grail and grille 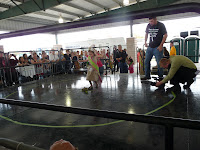 Anyone who has seen Vicki’s frog collection can imagine how she thought she’d unearthed the Holy Grail when she found the Frog Festival in Rayne, La.
Of course, that’s why Ian and Vicki were in a campground a mere 30 minutes away.
Rayne has been doing this for 38 years — a parade, crowning not only the Frog Queen but also Miss Tadpole, an arts and crafts show featuring everything from frog jewelry to plant stands, a midway with all the attached food vendors offering everything from cotton candy to boudin and other southern delicacies, including ironically frog’s legs, evening Cajun music and last but certainly not least, the frog-jumping contest.
But this is not merely a November weekend event. Rayne has murals whose numbers rival those of Chemainus, B.C., all containing at least one if not multiple frogs, plus at least two amphibian statues in town. The most notable of these is the tuxedo-clad frog, at least 12-feet high, with a body of burnished aluminium, deliberately not painted.
The sign beneath this fellow, who doffs his hat to travellers as they come off Interstate 10 and head into town, reads: “Sculpture of Monsieur Jacques, was created for display in August, 2006. For various reasons, the sculpture was left unpainted, or “skinless.” In this form, unity (of humanity) is represented by showing that underneath the colors of our flesh, we are all the same. Even though there are different skin colors, there is only one human flesh on Earth. “Not all flesh is the same, but there is one kind for human beings, another kind of flesh for birds, and another for fish.”
1 Corinthians 15:39
Welcome to Rayne.
At the local fairgrounds, the crowd watches the competition for Frog Queen and Miss Tadpole before noon on Saturday, as a water-filled crate is parked near the stage. Tape has been laid out on the stage surface in a circle, with an X in the centre marking the starting point for jumping frogs.
All contestants for Frog Queen, including the newly crowned royalty, all sporting their finery and tiaras of varying sizes, are clutching very large frogs, holding them around the body and leaving their long pairs of legs dangling.
They’re ready.
The girls crouch around that X on the floor, holding their poised frogs to the floor, ready to jump. When the starter yells go, the first frog to make multiple leaps across the stage to cross the ringing circle of tape is the winner.
There are rules. The girls cannot touch their frogs once the race has begun, but they can encourage it to jump. The small frogs react well to the stomp of a spiky stiletto heel immediately behind them.
They leap.
There are so many contestants that heats are held in different categories: the senior royalty, the Miss Tadpole contestants, boys, teenage boys and finally the adults, both male and female.
Eventually, a winner is declared in each category.
The youngest competitors each compete individually, as it would be chaos to unleash not only a bunch of frogs but small children, all at the same time. The frog is allowed three leaps, at which point the stewards measure its effort.
The stewards also are called upon occasionally for a rapid, mad scramble to capture an escapee.
One of the Miss Tadpole crowd is unimpressed as she lowers her frog to the stage and ignores its jumping efforts as she concentrates on wiping all trace of its existence from her hands and onto her pretty dress.
Another seems bored with the whole process so drops her frog to the starting line from chest height, prompting the event announcer to ask her if she needed a parachute for that move.
Her stunned frog crawls his way along, making it impossible to measure the final length of this effort, since he never did leap three times.
It is hilarious, made all the more so when the crowd shows its competitive nature, urging one frog or another along.
But there is no cruelty to the animals.
The sign for the frog’s leg vendor can’t be seen from the stage and no one mentions it to the frog competitors.
Posted by Vicki-Lynn and Ian Dutton at 11:17 AM