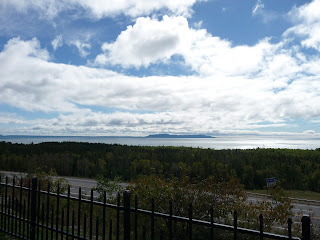 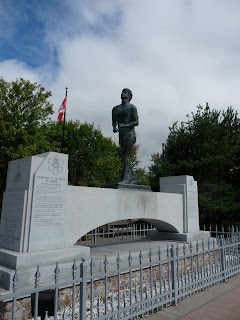 As Canadians, we have never seemed able to define ourselves adequately, wandering off into negative territory, comparing ourselves to others and saying what we are not.
Yet Terry Fox, a 21-year-old who would never grow much older, managed to define us more accurately in too few short months in 1980 than we have been able to since. He ran a marathon distance every day, for 143 days, as he tried to run across this vast land, beginning by dipping his only foot into the Atlantic Ocean at St. John’s, Nfld., and ending here, far short of his goal at the Pacific on the other side of the country. The monument to Fox sits high atop a hill just outside Thunder Bay, Ont., with a stunning view of Lake Superior, its sleeping giant of a hill a backdrop to the bronze statue of a young, determined man.
The monument is the focal point of a rest area on Highway 17, the Trans Canada in Ontario, indicated by a small road sign depicting a picnic table, the Ontario symbol for the thousands of rest areas along its highways. Luckily a larger sign referring to this tribute to Fox, who died on June 28, 1981, also indicates the turnoff.
We wander carefully tended pathways to reach the monument, passing under trees and down idyllic garden paths. Maybe the glorious setting fuels the impact of a monument, which reads in part that Fox changed how Canadians look at fundraising and how they go about searching out funds for a cause, in his case the cancer he could not beat.
As we drove along Canadian roadways these past weeks, we saw one young man, no support vehicle in sight, with a sign on his backpack saying he is walking across Canada. Another, spotted twice wheeling down the side of the road, backed by his crew hauling a U-haul trailer, is using his hands in a modified wheelchair to make his way across the country.
We know two young women who bicycled across the country last summer, all raising funds for one cause or another, all setting out with the expectation they will complete the trip.
Fox, the young man who started it all, finished in S?????, Ont., when the cancer that had already claimed one leg resurfaced to eventually take his life. As we look up to the statue, and we should be looking up, we wonder if he knows what he has accomplished. Does he know how many people, every September, take to Canadian roadways in every part of the nation, raising money for cancer research? Does he know a cure has yet to be found for what killed him? Does he know how many cancer survivors participate in those runs because research, fostered by the dollars Fox himself raised, has found ways to cure some? Does he know, so far, $500 million has been raised in more than 60 countries using his name?
The roadside tribute is fitting. It is a place to rest, and there is no hand extended, looking for a donation. That is left to each of us to ponder as we leave, and perhaps write a cheque later. Or maybe next August, when we first see publicity for the annual Terry Fox Run, twenty-some years after his untimely death, we sign the paperwork to enter the event and start raising our own pledges.
Or perhaps this particular disease is not the focus of our fundraising efforts, but we use the experience of Terrence Stanley Fox to raise funds for whatever cause inspires us.
And thanks to Terry Fox, those fundraising techniques are familiar territory to all Canadians.
Posted by Vicki-Lynn and Ian Dutton at 11:57 AM