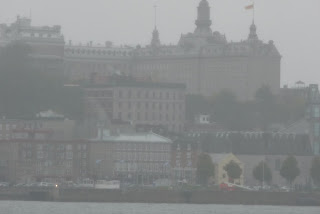 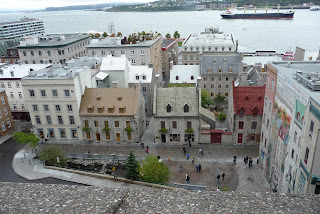 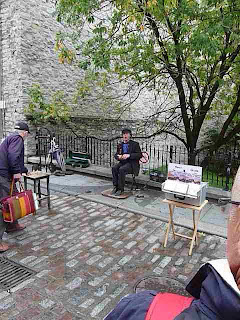 Low cloud and and a shifting, shimmering mist veil the outline of old Quebec, like the curtain waiting to go up on a medieval play.
As the ferry from Levis draws closer, centuries-old buildings begin to take shape, shouldering aside the mist as they’ve done for more than 400 years. As the ferry docks, modern Old Quebec shows itself, stores that have served customers since before there was an America, now catering to U.S. tourists and offering Chinese-made Canadian kitch. And still the city is magical.
There are restaurants everywhere. One, just off the dock where we land, has its outdoor umbrellas folded up, their white tops and black wings tucked up like so many soggy bald eagles hunched against a West Coast winter.
Galleries, too, are around every corner, (we fell in love with a stunning exhibition of fall colour by Christian Bergeron but alas don’t have $3,000 to spend on a painting) and the winding, sometimes-cobbled streets make for many corners indeed, outnumbered only by the tourists, even on this soggy September day.
For anyone to whom history is more than a hated course in high school, Quebec City is a place apart, a permanent settlement since 1608, and a hotbed of political ferment since the English set up permanent camp in the neighbourhood in 1759.
It’s in the house where Montcalm lived, and where his troops rallied to stave off the English after their surprise appearance in the Plains of Abraham. It’s in the statues of Quebec heroes, from Samuel de Champlain to Maurice Duplessis, in the walls of the Citadel and the magnificent Chateau Frontenac standing proud above it all.
There is an efficient, bustling tourism bureau at the corner of rue Fort and rue Sainte-Anne that offers the visitor everything from guided walking tours to motorized tours, St. Lawrence river tours or local ghost tours. Helpful personel man multiple kiosks, ready to answer any question from dazed tourists.
On the streets, there is the magic of a ride in a caleche, with the guidance of sure hands on the reins from someone with a solid knowledge of the city and its history. At the corner, there are sure hands on a fiddle and a set of wooden spoons, as a musician stomps out the rhythm of traditional Quebecois music on a small sheet of plywood at his feet, competing briefly with the peal of cathedral bells as a wedding draws to a close next door.
When Ian feels this kind of magic, he also wants to move to the dream. It’s happened before, notably on a trip to Victoria to see relatives. And look where that landed us.
But we also recognize the limitations as we try to converse with anyone, about anything. We have managed to order food (a Speciale Quebecois for lunch, consisting of soup aux pois, tortiere and tarte au syrop d’erable — pea soup, French Canadian meat pie and maple syrup pie) but to progress beyond that involves much hand movement, facial expression and frustration on both sides. We could not work here.
But maybe a longer vacation could be managed. We saw apartments for rent in the old town for $650 per month, condos in redone centuries-old buildings on the market for $160,000. There are people anywhere in the world interested in house swapping, and Pender is not too shabby a spot to list on that market.
The old city brings up new dreams. We’ll sleep well tonight.
Posted by Vicki-Lynn and Ian Dutton at 2:53 PM