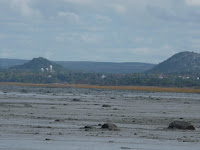 Goodbye Casse Croute.
Coming down the south shore of the St. Lawrence River on Sunday, leaving the magic of Quebec City behind us, we found new wonders to behold. The river widens, spreading its broad brown waves in the stiff wind blowing from the east. By the time we stopped at a lookout in St. Roch des Aulnaies, Que., we knew the sea was near. The smell of salt air was all too familiar as a rare brief bout of homesickness hit.
And soon the brown murk of the St. Lawrence was split up the middle by a ribbon of blue tide.
We remembered our old Rudy dog, on arrival at the Tsawwassen ferry terminal outside Vancouver after a camping trip with our girls on the Prairies. When we opened the van door in the ferry lineup, Rudy’s head went back, with that long snout pointing straight up, sniffing the wind. Then her tail wagged.
Before leaving Quebec, we stopped at one more Casse Croute (Casser la croute means to have a snack, or have a bite to eat so basically it means Snack Bar). The roadside stands have kept us fueled all the way from Shawville, where we crossed over the Ottawa river from Ontario, but this one was different. For one thing, the frites (French fries) in Vicki’s home area are much better. For another, chou (coleslaw) is on every hot dog and hamburger that is ordered all dress (all dressed) where she hails from. At this last stop, the frites were patates, garni was all dress and there was no choux. A hot dog looks quite pathetic wrapped in lettuce. The taste was gone.
But their menu had the additions of the region — crevettes and petoncles (shrimp and scallops). The landscape was changing, both on and off the menu.
It wasn’t long until we turned south at Riviere du Loup to make our way to New Brunswick. The landscape suddenly changed to rolling hills as we headed for a night in Edmundston, every bit as French as any Quebec town but across the New Brunswick line.
Monday morning brought with it a beautiful scenic drive, much of it alongside the border with the state of Maine, as we headed south, then east to Fredericton and then south again to Saint John. The hills rolled, with signs pointing to the Canadian version of the Appalachian mountains, sporting their fall colours as the season progresses.
The moose warning signs along the four-lane highway, some of it fenced off, are effective. The signs are done to scale, with the car perched next to the looming moose, much taller than the smaller hunk of metal. The message is clear. Tangle with a moose and you’ll lose.
Smaller highways were left for side trips. One led to a stop in Grand Falls at, appropriately, the falls. Nothing to rival Niagara, the falls are a result of a weir in the St. John river and the river gorge that leads to falls and rapids, spilling over carved rock formations. Unlike Kakkabeka Falls in Ontario, there is no charge to view the falling water.
Rock alongside the highway appears like a cut through the shale we are familiar with at home in B.C., but this gleams, showing the mica it contains.
Another jaunt off the Trans Canada takes us to the Hartland Covered Bridge, the world’s longest at 1,282 feet (391 metres). A little patience as we wait our turn to travel across the one-lane structure, built in 1901 and covered in 1922, lands us on the other side in a rare patch of sunshine.
The national historic site, fittingly, saw the Olympic Torch carried through its portals for the 1988 Winter Games.
We decide maybe we won’t turn off into Nackawic, home of the world’s largest axe. So far, we’ve skipped out on many things that come with the world’s largest title attached to them. The covered bridge, the world’s longest, was exceptional.
Vicki thinks she remembers the covered bridge from a family trip made by car when she was four years old. Her only other memory comes from the Irving gas station signs, as we head into an Irving-dominated business area. On that childhood trip, she and her two brothers played a game in the backseat called Hit the Irving. At every Irving station, and there are many in the Maritimes, there was a race to hit the Irving, her older brother Ian, in the backseat. No doubt the game was conceived by her eldest brother, Warren.
Sorry brother Ian.
Husband Ian claims the game hasn’t changed.
Posted by Vicki-Lynn and Ian Dutton at 7:15 AM