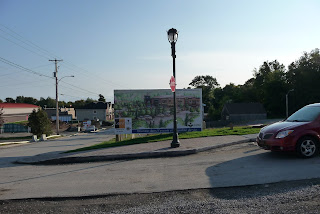 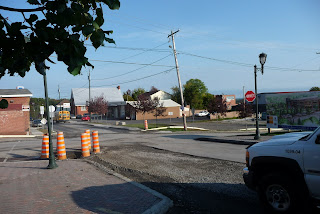 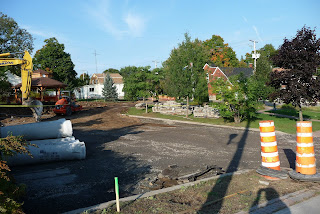 Vicki’s dad Vernon, too young to serve overseas in the Second World War, was old enough to sit on the steps of the Social Club at the centre of booming Brownsburg, an explosives and ammunition factory it’s main employer, and watch as busloads of women arrived in town, primarily from the Maritimes, to keep the plant working 24 hours a day.
Four generations of Vicki’s family have worked in that factory, making everything from ammunition to plastic combs with CIL, as the owner. Her great-grandfather, on the one day he didn’t carry his treasured pocket watch, died there in an accidental explosion, a rare but not impossible fact of life when dealing with explosives.
The plant, as it’s been known forever locally, is now part of Orica Canada, the world’s leading manufacturer of explosives, focusing on the mining industry. It, from all reports, is booming, keeping the town employment level up, with explosives the mainstay now, not ammunition.
In the past, when “the company” was booming, so was the town. Apparently not these days.
Brownsburg’s core looks like the town was actually the testing ground for the explosives manufactured just down the road. What was a handful of longtime businesses, in a block that boasted second-floor apartments to house some of the workers in the commercial core, no longer exists. When the town purchased the block, it was because it had deteriorated so badly it was condemned. It was torn down, with nothing to replace it.
The main intersection, which once boasted the one and only traffic light, now is controlled by four-way stop or arret signs, one of many such intersections in town. Across the main street was the Flamingo Hotel, a mainstay for some townspeople but it too met the wrecker’s ball. It is another vacant piece of land at that corner.
The town has a large sign up, with plans to replace these buildings, again with businesses on the ground level and residential above but the town, out of money, is seeking a partner in the project.
No one has come forward over the last few years so the town sits, looking bereft. This year’s summer work on sewers and water lines doesn’t improve appearances or function as drivers bounce through the old streets. The Social Club came down years ago, replaced by a small park now torn up for ongoing sewage and water works.
The town offers no reason to stop as cottagers head straight for their lakes to the north, and townspeople roll the few kilometres down the main road to Lachute to stock up on all their needs.
But it is clear the people who still live here are working in a prosperous environment and enjoy their homes. The houses are well-tended, brightly painted or covered in the field stone that torments the area farmers. Front porches are well used and covered in outdoor furniture. The local arena, named for the town’s only hockey player to reach the NHL, Gilles Lupien, is busy and now houses a small library at the front of the building. The Legion Hall next door is well tended and used. The largest building on the street once was the local English school, grades 1 through 11 in those days, which now is an apartment complex.
The depanneurs (the Quebec term for convenience store) are some of the few commercial outlets. The small grocery store still limps along, waiting for better times. Townspeople are served by a post office, a small pharmacy, a pizzeria, another restaurant and of course, a bar. And under Quebec law, the depanneurs and grocery stores can sell beer and wine.
Most of the Protestant churches have closed their doors, some with a For Sale sign up front, but the Catholic church, always the largest in a Quebec town, still thrives perched atop a hill.
At some point, maybe the politics will work itself out and the town will fill its coffers from taxes paid by all those who live there. Maybe then, work can begin on reconstructing Brownsburg’s once-thriving downtown core.
Posted by Vicki-Lynn and Ian Dutton at 9:40 AM