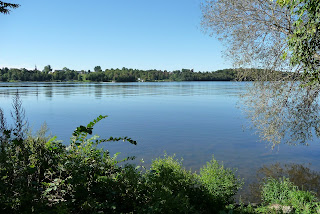 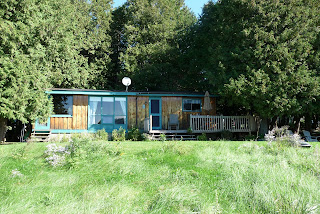 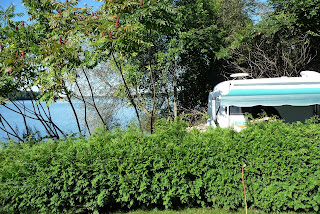 Just down river, we are told, people pay $6,000 to park their trailer from May to September in a campground within sight of the Carillion Dam, producing hydro-electric power for the Montreal area.
We have parked our Burro not in a park, but on private land that once belonged to Vicki’s grandparents. We are sitting a few feet from the water, lulled to sleep by small, lapping waves. The memories of this place, now owned by one of Vicki’s many cousins, are strong for both of us since we spent some of our honeymoon here as Vicki’s parents threw a party for all those people who couldn’t attend a wedding in Regina.
Large boats go by, usually seeming to be travelling together, but it’s actually a function of the dam. They have lined up and waited together to fill up the locks before the mechanism is set in motion to lift them from one level of the river to the virtual lake that now sits on the upper side of the dam.
When Vicki sees friends in the nearby towns, she can invite them over, saying, “We’re at the camp” and they’ll know to drive out on the river road, and turn toward the water when they get to St. Mungo’s United Church.
In the early ‘60s, Vicki’s grandparents bought two lots carved out of a farmer’s field. For the first few years of cottage life, there was a fence and gates to keep the dairy cows out. Her grandfather, tired of dealing with marina owners, bought the land so he could have his own dock for his small boat. Her grandmother, who was afraid to be out on the water and never set foot in the boat, saw no point in this and insisted a pine pre-fab cottage be put in place one weekend. It must have been rainy because for years there was one muddy boot print on the living room ceiling.
But neither grandparent was the sort to stay at a cottage so they turned to their only child, Vicki’s father, and said, “You’d better us it.” One bedroom was set aside for the grandparents, who almost never used it, another housed the three kids and Vicki’s parents took the last bedroom.
Use it they did. The weekend after school was let out every June, the family packed up and moved to the camp until Labour Day. The cottage is only a 20-minute drive from what was their home so Vicki’s Dad made only a slightly longer commute to Brownsburg’s CIL factory. Her mom, a lifelong non-swimmer, was left with her three young water rats diving into the river in early morning and not leaving it until nightfall. There never was a telephone in those days so she always wondered how she would summon help if needed. The kids knew that “pretending” they were in trouble in the water was simply not acceptable. Of course, that doesn’t mean they didn’t try it occasionally.
Vicki has vague memories of looking at the land and being told that the river, way over there on what is now the other side, was going to grow when the dam was completed and be at our doorstep. Hard to believe when you’re six years old but when it was time to move in, there was the promised river. The big rock she had her eye on, figuring she could climb that one many times, was long submerged.
As a new lake of sorts, the river continued to belch up some of the bits and pieces of the flooded land. Tree parts would float to the surface now and then, but since the river was used to transport pulp logs to a mill in Hawkesbury, Ont., up river and on the Ontario side, branches were the least of a boater’s worry. Those pulp logs would become water-logged, and sink first from one end, just bopping along the surface, and wipe out a motor’s prop in one hit.
As we grew older and took to water skiing, we knew that dead heads, those submerged demons, were unwanted companions. Boat and skier could be seriously injured in one encounter.
That shiny pine cottage, always known as the camp, doesn’t shine so brightly almost 50 years later. It has weathered the harsh winters, held its roof up during ridiculous snow loads and waited for its update each spring. For Vicki’s father, and now her cousin Glenn, it becomes another home to maintain. The front side, with its southern exposure, demands paint every year, the grass always will grow and need cutting, and the cedar trees need attention to broken limbs from a harsh winter.
Remains of one dock or another dot the shoreline as dock technology evolved to the point the current structure is removed every fall. It took years for property owners along the river to find structures that could be lifted out because no matter what they put into the water, if was there in the spring when the dam is opened to release an excess of water and the ice shifts, the dock could not take the battering. Ice destroys anything in its way so the cribbing structure filled with the endless supply of rocks that make up the river bed disappeared years ago. The concrete u-shape that housed the boat, protecting it from the wash of larger boats going up and down river, was ripped from its pinnings and lies askew on one side of the property.
Glenn’s dock will be removed sometime around Thanksgiving and spend the winter, protected on shore, to wait for another spring.
Vicki and Ian sit beside their Burro, greeting the rising sun downriver and later watch it set upriiver, he with some memories of the place, knowing she is caught in the past when she’s here, at least for a time.
Posted by Vicki-Lynn and Ian Dutton at 9:07 AM