Back to the future? 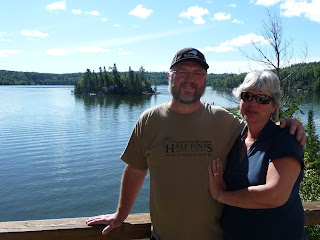 It’s a time capsule perched atop the rocks overlooking LacLu, north and west a bit from Kenora, Ont.
Like a retrospective of Ian’s life, dating back 50 years, you can draw out a statement about his past from any of the long-time neighbours, owners of what were originally five cabins, sold off by the Canadian Pacific Railway after they had served their time as rental cottages for employees. Only one of the original log cabins remains, and that as a guest cabin next to what is now the owners’ main residence.
Other cabins have sprung up along the paths that wind upward from the docks at the lakeside below, some replacing rotted log structures, and others housing young adults who have come to call this their special place, alongside their now-aging parents. The peninsula, as yet accessible only by boat, bulges at the seams. One of the next generation, still young at 30 years old, is hatching a plan to build a road into the cabins, and to a lot where he hopes to build his permanent home. For now, he rents accommodations on the lake that was so important to him as a child that he had to find a way to work, live and volunteer as a firefighter here.
Ian and Vicki’s 25-year-old daughter, Robyn, who has called Winnipeg home for eight years now, settled in for a Labour Day weekend of cabin life, with its touch of sadness that the season is coming to an end, wanting to hear all the stories about her father, the ones she was “too young” to hear when last visiting.
Her fiance, new to that role as of last week when both sets of parents were in town to hear the news, flounders as a hockey fan trying to find his place in this new family which follows the Winnipeg Blue Bombers every step of the way in the Canadian Football League. And the others whose absence is felt: Ian’s arthritic sister with new knees and new shoulders found the trip impossible this time, and his mother, at 91, staying home in Winnipeg to help her daughter in her recovery. His niece and her husband of a year now claim the bedroom Ian built in the front porch almost 30 years ago for himself and Vicki, his new wife. Jennifer and Brian, with a wedding to attend in the city, graciously lent it out to the original occupants.
There are other treasures too: an old tackle box with the lure Ian used to catch his first fish; an old wooden boat, now dragged up on the bank, that 50 years ago was the sole means of access, oars and all, to the cabin.
Bob Roe, Ian’s brother-in-law, the constant behind all the upkeep and maintenance of a second home, the man who continues to pilot the boat across the lake almost every summer weekend, is here to shepherd the old family, in many ways newcomers, around the changes in the cabin.
We don’t hear the new stories, about parties and events that happened here over the last 20 years, the ones that are memorable for the friends here who graciously talk mostly of the old days when the cottage was a central part of our lives. We appreciate their kindness in making us feel like we belong still, and in not telling us of all the great times we missed here as we made our own memories there, on the West Coast.
We wait for the constants, and are thrilled by the laughing warble of the first loon, the screeching of the eagles overhead, unexpected chatter that turns out to be not a very loud squirrel but an otter calling to its pals for play, the chipmunk nattering that torments a new generation of dogs at the base of the trees and the distant rumble of CPR freights and the occasional VIA passenger train as they make their way down the other side of the lake.
The time capsule cottage still holds some of our memories: those carved ducks deposited here when there was no longer room for them on the coast, that special mug that was Vicki’s way back in a Toronto apartment leased while she was at Ryerson studying journalism, the cherished pair of fuzzy sleeping socks she left here on the last visit six years ago, tucked away in that same little spot at the foot of the bed. But there is also little trace of Vicki and Ian’s presence, or that of their then toddler girls, as new memories have moved in. As they should.
But on the Monday evening of the long weekend, when the rest of the family has gone “home” to Winnipeg, we spend a last evening enjoying our memories of a cherished place before we head off to our little Burro in the morning and resume the journey.
Posted by Vicki-Lynn and Ian Dutton at 7:10 PM