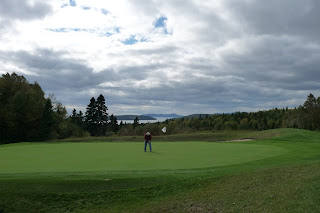 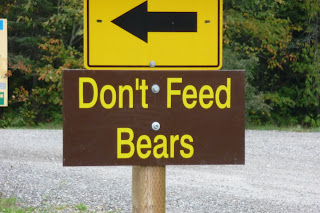 Don’t feed the bears.
After the sign advertising the campground, that’s the first sign you see at the Penn Lake Marathon Lions Campground. And since we’re within town limits, we wondered if it was really necessary.
That’s when someone told us about the 10 bears trapped in town last week.
Okay, we thought, so there’s a bit of a bear issue, what with the cold, wet weather that descended on this northern Ontario town of 4,000 people around Labour Day, and coincidentally with our unplanned, truck-repair arrival.
We heard last Thursday that just before we set up camp, a bear was spotted nosing around the bear-proof garbage container provided for campers. Not being totally stupid, we have not set up a garbage bag outside Harley for our use. Garbage has stayed inside the trailer until it is quickly taken away to the bear-proof bins, usually by Ian.
We have been comfortable here, as we approach our last night, and unconcerned, other than to make sure Sidney and Luther, our cats, don’t wander outside with only a little rope accompanying them. One of us has been on the end of those ropes for their occasional circuits.
We have bicycled into town more than once, to haunt Marathon Classic Coffee, a mall cafe that recently installed WiFi and has profited from that, mostly through us. Breakfast was lovely this morning as we sat with computer in front of us, updating all and sundry on our transportation woes.
We have walked into town, also more than once, to check on progress at Canadian Tire and today we made our way to the golf course. It’s evident there’s an addiction issue when Ian was spotted climbing a step ladder to get into the back of our truck, by now dangling on a hoist with its transmission lifted in the bowels of Canadian Tire.
We stuck our thumbs out, with clubs at side, on the main drag and quickly were rescued by a golfer, surely recognizing an addict when he saw one. He took us straight to the course, even though he had been headed off somewhere else when he picked us up.
We were walking out of the golf course, a Stanley Thompson-designed nine-hole affair that satisfied the addict quite nicely, when a couple we had seen golfing offered us a ride. They ever so nicely, in what we see as typical Marathon fashion, brought us right back to our campsite.
But maybe what we have seen as wonderful neighbourliness has actually been an unwillingness to find out in next week’s paper that we were mauled at the side of the road while waiting for someone to take pity on us.
“I’ve had eight bears trapped in my backyard,” said this latest good Samaritan, pointing out that 60 — did we hear right? that’s six-zero, she said? — have been snagged in live traps in Marathon this summer.
It seems a plan was hatched to deal with the bear problem at the local dump. That involved double fencing, which has successfully kept the bears out, of the dump anyway. Add to that a hot, dry summer — hard as that is to believe at the moment as we snuggle up in Harley with the heater blowing — and you’ve got hungry bears discovering their favourite restaurant has firmly closed its doors.
What else to do but look for a new establishment.
Our latest driver tells us she had one, which she referred to as a beast, that really didn’t want to end up in the live trap, the one that has taken up residence in her backyard. Imagine pointing out your patio to visitors, the lawn swing, and oh yes the bear trap.
But this brawny bruin was nuzzling around the trap and looking as if it would be drawn in by the bait when it got a whiff of the chicken stir-fry she was preparing at her stove, inside her kitchen. It made a beeline for the house almost as quickly as she dialed animal control. By the time they arrived, it had fled. Eventually it was trapped and quite unhappy about it, since apparently it had been through the trap-and-relocate experience once before, didn’t care for the enforced vacation and trundled home.
In other words, the bears are being moved out of town when they show themselves to be a problem and some of them are coming back, having found — as we have — that Marathon can be quite a hospitable place.
Posted by Vicki-Lynn and Ian Dutton at 8:47 AM